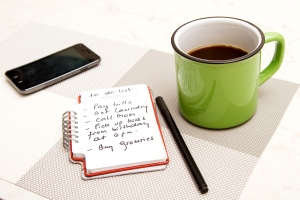 So, I’m officially on holiday for the summer. This was something I’d promised myself about 2.5 years ago when I was in serious need of some significant R&R. Something promised, but only just realised.  In my mind’s eye I envisaged sipping champagne on the beach, soaking up the sun on the coastal reaches and generally living la vida loca.

In fact, the last 2.5 weeks have been a frenzy of builders (yes, they are still back doing snagging) , sorting out the boxes in the cellar (thank you universe for spiders, …not!) and doing heavy labour in the garden (mega slugs, you are not my friend and will die).  And of course, I haven’t mentioned the five page ‘to-do’ list that is the inevitable result of working away from home for months at a time.   In fact, it was while I was focusing on the ‘to-do’ that I found ‘The List’…

Now I should state that ‘The List’ is not a specification for a decent man. I found him already and yes, he does have his own hair and teeth, so if you want to know more, read my blog A is for attraction. Anyway, I digress…

Aforementioned ‘The List’ captures my ambitions, hopes and dreams. It’s called ‘47 things I’d like to do before I turn 50! ‘  It’s 47 for a reason. Why be conventional and pick 50!  I’m still adding to it, but what struck me is that instead of chasing the extraordinary, we put our dreams on hold to pursue the everyday.  Life is short, so make it good. Make a list. Follow through.

Personally, I’m determined to tick some of the following:

List Item#1: Learn to shoot clay pigeons.  Now, I admit this isn’t what you’d imagine as a first choice. It’s just a way for me to deal with unexpressed anger. Yep, try explaining that to the man who gives out gun licences!

ListItem#2: Travel on the Japanese Bullet Train. In my imagination, Japan is the land of BladeRunner. The explorer in me wants to go somewhere so culturally different that I might as well be on another planet. The sci-fi geek wants to do hi-tech in Tokyo!

ListItem#3:Fall madly in love, at least one more time.  Ticked that one!

ListItem#11: Trace my family genome. OK, I like weird science and I want to know if I’m related to the Vikings.

ListItem#15: Drink cocktails in BoraBora.  Well, that is definitely one for the big 5-Oh!

In the meanwhile…I’ll give the slugs some beer and sip champagne on the sundeck.