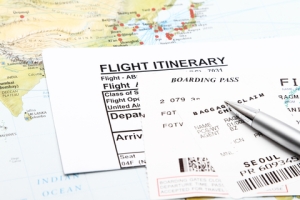 As a singleton, one of my fantasies always involved meeting Mr. Right on a plane. And no, this does not involve becoming a member of the mile-high club, so you can stop reading right away if that’s where you think this blog is going!

Anyway… in this particular airborne dream, Mr. Unique would be sitting next to me – sharp suited and smelling of expensive aftershave.  I’d be channelling trans-atlantic chic. He’d be ruggedly handsome and interesting. I’d be interested. We’d talk and find we had so much in common…

Uh...well, I don’t know about you, but… the gods that rule the check in system seem to take particular delight in putting me next to smelly old men and sociopaths!  If I didn’t know any better, I’d assume this was some sort of cosmic prank.  On my last plane I sat next to a guy wearing socks, sandals and a comb-over!   And I haven’t even begun to tell you about the annoying parents who spent an entire long-haul flight back to SA, bickering with their three year old in between bickering with each other. There is a lot to recommend business class, and I’m not just talking real cutlery here!

Still, you do sometimes meet interesting people. Snoggable…? Erm…no.  Fascinating…most def!  On a flight back from the US, I met a guy who had invented robotic fish with hidden cameras, which were used for conservation purposes. In Finland, I met a super cute four-year old, who spent the entire flight introducing me to ‘Katten’ – her favourite cuddly toy…My Finnish is rubbish, but just as well I can speak ‘kid’.  I’ve also met a man who insured space ships for a living…sadly, there is no ‘alien abduction clause’…I checked!

For readers of this blog who think my rich imaginative life has been the balm that soothes the melancholy heart of a solo traveller?  Well, what I didn’t tell you was that the girl sitting in Row B also happened to be sitting next to the man of her dreams when she flew to Spain last weekend. We met mid-air, but not on a plane. He is…ruggedly handsome and interesting. He does not wear socks or sandals, and he smells good. Really good!  I am…of course, smitten. But that is the subject of another blog…